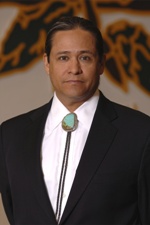 Mark Macarro has been the Tribal Chairman of the Pechanga Band of Luiseño Indians for 14 years. He promotes economic independence and political self-determination for the Temecula Valley, California-based tribe. Macarro also sits on the board of directors of the National Indian Gaming Association and represents his tribe in the National Congress of American Indians.

Mark Macarro believes the Pechanga band should preserve and maintain its identity and culture. In the 1990s, he helped establish the Advocates for Indigenous California Language Survival to fund programs encouraging the study and teaching of the tribal language. He also played a role in the creation of a bilingual elementary school. Known as the Cham'kkilawish School, the facility teaches a number of subjects in both English and the tribe's native language.

In 2007, Mark Macarro joined the Harvard Project on American Indian Economic Development. As a member of the project's board of governors, he assists in identifying model projects that can potentially foster economic development throughout the Native American community.

Mark Macarro served on the Democratic Party Platform Committee and the Electoral College in 2008. In 2010 and 2011, California political blog Capitol Weekly named him to its list of 100 influential figures in the state.